The Rights of the People in Hudud, a Different Status in Jurisprudence, Law and Judgment

Concerning Hudud punishments, the dominant belief is that except for the Qazf, these punishments are all the right of God, and everything is determined in the Shari'a. The view is so dominant that the scientific discussion about the revealed possibilities of these punishments is left out according to the current rules and approach, the remission by the complainant for Hudud crimes does not affect the maximum punishment. Therefore, many convicts have been sentenced to death with remission by the complainant and are waiting for the execution of their sentence or amnesty. The main question arisen in this regard: Is it possible to raise the right of the people in Hudud and its effect on punishment or not in Hudud crimes where victim position affects the cause of hudud? This article is responsible for answering this question by using library resources and study of judicial procedure.

1. Introduction
In Iran, two Conventionalism and Shari`atist discourses are competingly put together by the formation of the rule of law. One of the most important areas of contention has been the concept of right. In the post-revolutionary legislation, the vicissitudes of this contention can be clearly seen.
The dominate belief in Hudud punishments is that these punishments are all Allah’s right, except the punishment of Qazf, so everything is determined in the Shari'a. The shadow of this view is so heavy that it does not allow scientific discussion and examination of the undisclosed potential of these punishments. Therefore; Although the subject of the verdict is clear in some parts, there are many cases that have not been well seriously questioned and general verdicts have been issued about them, so they do not have clear and distinct explanations. These challenges are now more apparent as some of the jurisprudential-criminal texts have been transferred to law and the courts are obliged to apply these laws.  In Hudud punishments, the legislator's attempt to link jurisprudence with common law is less than other sharia punishments, so the relationship of some concepts of common law with Hudud punishments is not clear. The subject of the right and its owner are among these concepts. By paying attention to some of the behaviors deserving Hadd, one can clearly see the presence of human rights alongside Allah’s right. However, this right does not interfere in the determination of punishments, and the victim of the crime is reduced to one declarant. Not only does his amnesty have no effect on punishment, but the rights of other victims of these crimes are not guaranteed. As a result, it has made the prosecution process more difficult. According to the current rules and approach, the plaintiff's pardon for crimes deserving of a Hadd, has no effect on determining the Hadd punishment. As a result of this approach, there are many convicts who have been sentenced to death despite the plaintiff's pardon and are awaiting the execution of their sentence or amnesty. In this regard, the main question is whether in crimes deserving Hadd, which the victim's position helps to create or increase Hadd, is it possible to raise the rights of the people within the hudud and its effect on punishment or not?

2. Methodology
The present research has been done by descriptive and analytical method using library resources and judicial experiences and opinions.

3. Results and discussion
According to the findings of the research, all Hududs are not merely Allah’s right. The title of hudud (meaning the punishments whose cause, type and amount are determined in the Shari'a) does not have the truth of the Shari'a and is in fact in the religionist conduct. In modern terms, this definition is made by the community of jurists and a behavior can be both Allah’s right and People’s right in some circumstances. This amalgamation has been seen in the article and its effect on determining and stabilizing punishments has been measured and have consequences.

4. Conclusion
contrary to the seemingly inflexible provisions of the Hudud, it is possible to determine the position of the victim in the criminal process and his pardon can be considered effective in reducing the punishment in some Hudud. In addition, by understanding the needs of the current society and citing some minority fatwas, a right was considered for people other than the guardians with the behaviors deserving the Hadd.

Selection of References
Tavakoli, F., Aghababaei, H. and Shahmalekpour, H. (2015), “Religious Principles and Principles of Criminalization of Insulting Sanctities and Challenges”, Journal of Criminal Law Research, No. 2, pp. 49-74. [In Persian]
Hajidehabadi, A. (2018), Rules of Criminal Jurisprudence, Fourth Edition, Qom: Publication of the Research Institute and the University.  [In Persian]
Khoei, A. (2011), Criminal islamic jurisprudence, by Alireza Saeed, first edition, Tehran: Nashr-e Khorsandi.  [In Persian]
Reza, M., Qolipour, M. and Ali Burji, Y. (2005), “Criteria for distinguishing between Allah’s right and People’s right and its important examples in the jurisprudence of Islamic religions”, Tolo Noor Magazine, No. 15, pp. 1-15. [In Persian]
Feyz, A. (1994), Conjunction and Adaption in Islamic Public Criminal Law, First Edition, Tehran: Ministry of Culture and Islamic Guidance. [In Persian]
Mohaghegh Damad, M. and Mousavifar, S.M. (2014), “The crime of apostasy in the traditions of the teachings of criminal law”, Razavi University of Islamic Sciences, No. 8, pp. 1-22. [In Persian]
Mahmoudi, M. and Babaei, M.A. (2020), “Fundamentals of criminalization of disregard of religious hijab in Iran”, Journal of Criminal Law, Eleventh Year, No. 21, pp. 274-256. [In Persian]
Mousavi Khomeini, R. (2011), Tahrir al-Waseela, Seyyed Abbas Hosseini Nik, Second Edition, Tehran: Majd Scientific and Cultural Association. [In Persian]
Meybodi, H. and Gholami, A. (2021), “A Study of the Criteria for Determining the Severity of Discretionary Thefts Based on the Pattern of Hadd Theft”, Journal of Criminal Law, Year 11, Number 1, pp. 25-50. [In Persian]
Najafi, M.H. (2014), Jawahar al-Kalam Hudud and Punishment, translated and explained by Dr. Akbar Nayebzadeh, Volume One, First Edition, Tehran: Khorsandi Publications. [In Persian] 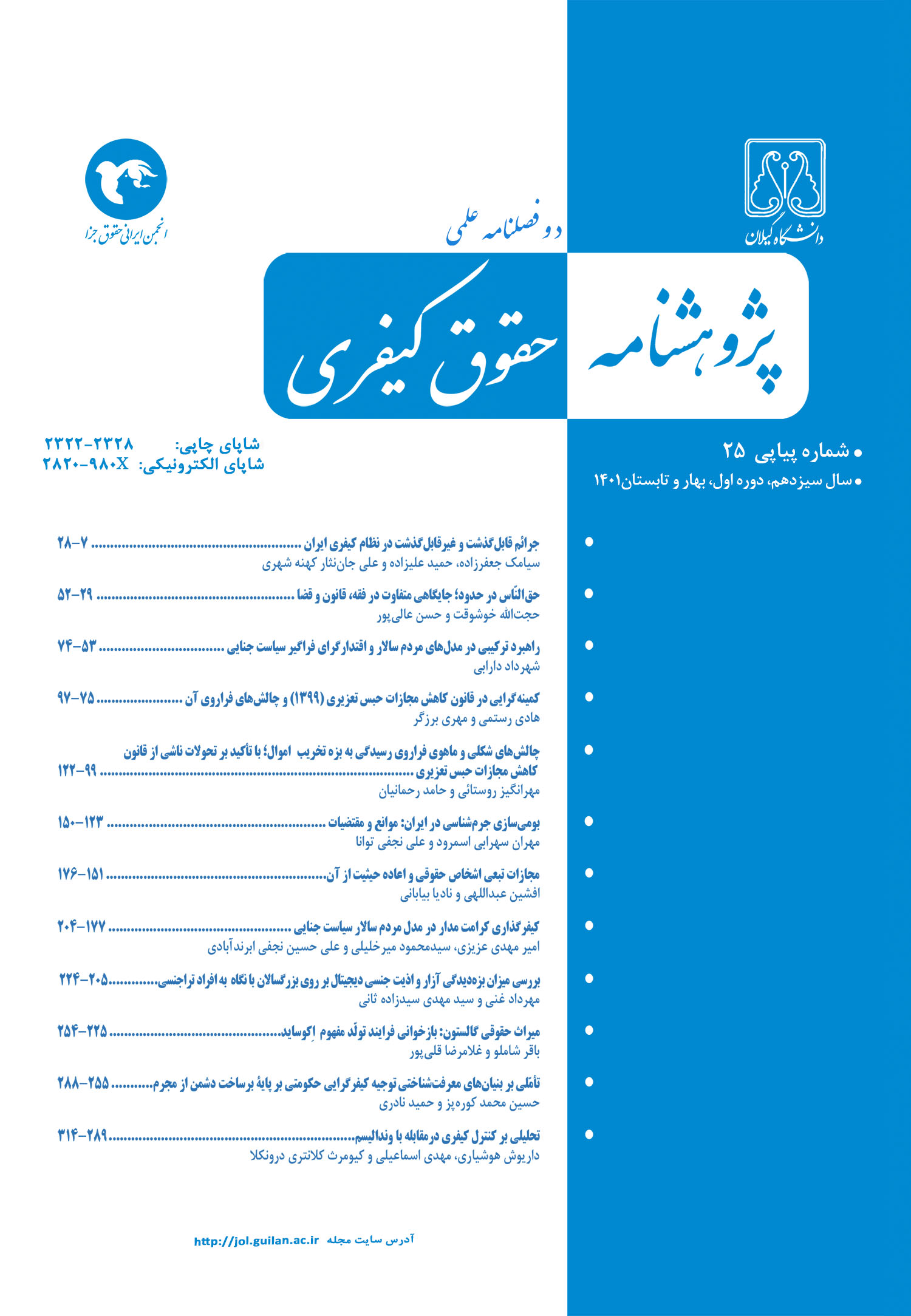